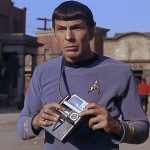 Remember the old Universal Translator as modeled here by the late Mr. Spock? One of the first (or perhaps future?) examples of integration solutions, and certainly one of the most fondly remembere

d! But at its heart, it is also an almost perfect representation of the integration challenges today. Many years ago, there was EAI (Enterprise Application Integration) which was all about integrating homegrown applications with purchased package applications and/or alien applications brought in from Mergers and Acquisitions activity. The challenge was to find a way to make these applications from different planets communicate with one another to increase return on assets and provide a complete view of enterprise activity. EAI tools appeared from vendors such as TIBCO, SeeBeyond, IBM, Vitria, Progress Software, Software AG and webMethods to mention just a few.

Then there came the SOA initiative. By building computer systems with applications in the form of reusable chunks of business functionality (called services) the integration challenge could be met by enabling different applications to share common services.

Now the eternal wheel is turning once again, with the integration challenge clothed in yet another disguise. This time it is all about integrating systems with completely different usage a resource characteristics such as mobile devices, IoT components and traditional servers, but also applications of completely new types such as mobile apps and cloud-based SaaS solutions. In an echo of the past, lines of business are increasingly going out and buying cloud-based services to solve their immediate business needs, or paying a third-party developer to create the App they want, only to then turn to IT to get them to integrate the new solutions with the corporate systems of record.

Once again the vendors will respond to these user needs, probably extending and redeveloping their existing integration solutions or maybe adding new pieces where required. But as you look for potential partners to help you with this next wave of integration challenges, it is worth keeping in mind possibly the most important fact of all; a fact that has been evident throughout the decades of integration challenges to date. Every single time the integration challenge has surged to the top of the priority list, the key differentiator contributing to eventual success is not the smarts built into the tools and software / appliances on offer. Rather it is all about the advice and guidance you can get from people with extensive experience in integration challenges. Whether from vendors or service providers, these skills are absolutely essential. When it comes down to it, the technical challenges of integration are just the tip of the iceberg; all the real challenges are how you plan what you are going to do and how you work across disciplines and departments to ensure the solution is right for your company. You don’t have the time to learn this – find a partner who has spent years steeped in integration and listen to what they have to say!

I have previously written about the application of Web2.0 technologies to enterprise problems at a general level.

In the past, I have taken the view that the Web2.0 technologies may be of interest, but the enterprise application of the ‘social computing’ side of Web2.0 was still very immature: the general value of collaboration was clear but how it would be implemented and which pressing business problems it addressed were not.  This lack of maturity was reinforced by fighting talk from some Enterprise 2.0 proponents about changing the way enterprises work by up-ending hierarchies and claiming that when the “facebook generation” moves into the workforce all will be changed.

However, I think that the concept is now maturing as can be seen from announcements from both BEA and more recently Progress around what BEA calls Enterprise Social Computing and Progress calls Socially Oriented Architectures.  What is promising is that both announcements focus on the application of social computing (and it’s ability to enable fluid communication and information sharing) to solve business problems.  In the case of ESC (an acronyn to make any tech marketeer smile), the application is to the area of process improvement.  As my colleague, Steve Craggs explains in his new insight on ESC and SOA (which is free to download at the moment!):

“If a company can understand a little more about how employees are solving their day-to-day work-related problems, it should become possible to establish best practices or carry out training to improve employee performance. The traditional approach to solving this problem is to engage an external business process re-engineering expert. However, these experts are both expensive and disruptive. In many cases, the best practice expertise is already there—it is just that it is un-communicated, locked in the heads of one or more expert employees.”

And of course, it isn’t a huge leap to realize that SOA is a fertile place to start using such an approach – as this requires a high degree of communications across organizational boundaries and involves tech-friendly staff more likely to adopt new concepts like ESC.

Ranadive, CEO of Tibco, has announced that Tibco board would of course consider offers.

And after the recent news about Business Objects and BEA, such offers may seen inevitable.  Jeff Schenider of MomentumSI for instance argues that we have entered a period of inevitable consolidation.  While I certainly think we are already in an era of big-4 and the rest, that does not necessarily mean that every ‘small’ software company (and remember these are only small in comparison to the giants) must be bought.

I personally wonder.  On the one hand you could ask why not?  Tibco has excellent top tier customers who use its long standing messaging products for core business processing.  It also has some of the best SOA products in its BusinessWorks portfolio – combining enterprise grade reliability with good tooling.  However, I think you need to look a little deeper about the two acquisitions which sparked this consolidation talk:

BusinessObjects is in what should to be the hot growth area over the coming years – business intelligence – and thus is perfect for the vendors who want to find a new thing to sell to their customer base or a new way to justify their existing product line (by adding a BI layer on top).  Business Objects should have been a target for IBM and Oracle as well as SAP.

BEA was generally believed to be a long term target for Oracle – BEA had after all used the application server wave to capture business from so many of Oracle’s enterprise customers.  Oracle first took quite a while to take application servers seriously and then took quite a while to become competitive.  Buying BEA finishes the job off quickly and gets back ownership of all those straying BEA customers.

With Tibco, there is no obvious buyer (as Oracle was with BEA) nor is there a neat fit into one of the majors (as BusinessObjects was with SAP).  Of the 4 listed by the “Analysts” quoted above, only IBM would make any sense.  And Oracle, except that it is busy trying to eat BEA.  Therefore, I don’t see Tibco being bought except unless it is Skyped (bought for over the odds to avoid somebody else buying it).

Oracle has finally done what so many rumours have pointed to for at least a few years:

made an offer to buy BEA.  I am sure that there will be much comment on the challenges of dealing with the total overlap between BEA’s core product – the WebLogic applications server – and Oracle’s application server (both in the top three by most measures of market size).  The move should also take the wind out of speculation that Oracle will make a spoiler bid for Business Objects.

The writing off of BEA as a business by some has been totally over-stated.  However, I think if this bid is successful it does marks the end of the J2EE era.  Not that I am suggesting that J2EE application servers are going to go away of course.  Rather, the world has moved on from what created that market in the late nineties.  At one end of the spectrum, the focus has moved back towards technology independent architectures with SOA (just as CORBA attempted to do in the pre-J2EE days – all be it by creating another set of technology).  At the other end, lighter weight approaches such as Spring have superceded the heavier and more complex EJB model (which to be fair has also moved with the times but probably too late).

It is also worth noting that the disappearance of the large enterprise focused ISVs continues – in one week we appear to be losing another two.  It is beginning to look like that the enterprise software market is heading for a strongly polarised world made up of a big-four (MS, Oracle, IBM and SAP) with a huge gap to the next division.